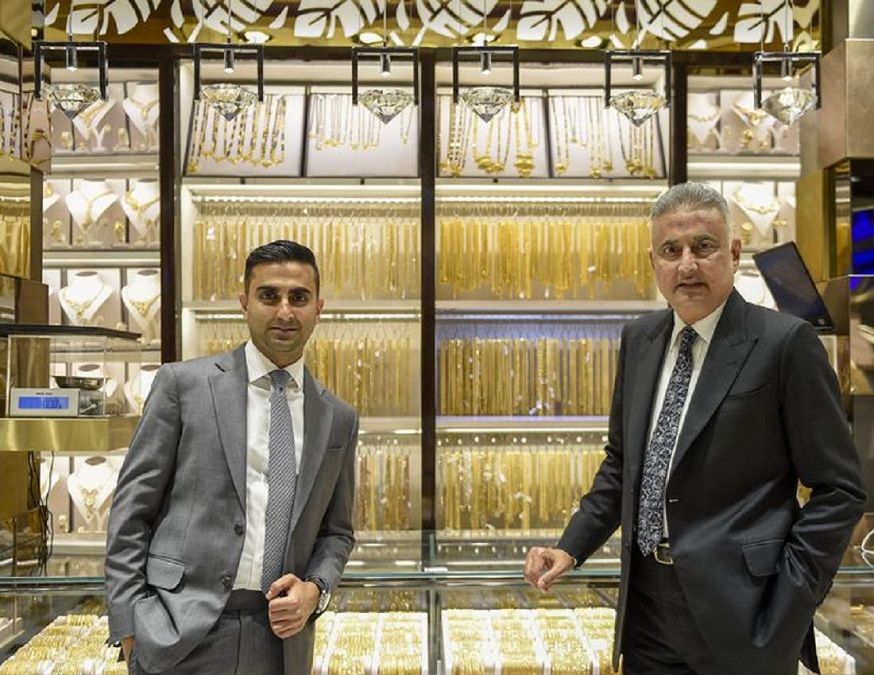 When Vajubhai Dhanak, a goldsmith from Gujarat landed in Dubai in 1958, his family had a debt of Rs5,000. Vajubhai worked in Dubai as a goldsmith at a salary of Rs500, before returning to his home country with the family. Years later his son Anil Vajubhai would return and start his own jewellery shop in Dubai. Anil went on to live his late father’s dreams and built Kanz Jewels, a multi-million dollar jewellery line in Dubai. We talked to Anil Vajubhai Dhanak of Kanz Jewels about how his family struck it rich over the years and became part of the UAE Success Story.

Anil’s father Vajubhai was all of 18 years when he decided to take the big step of leaving the comfort of his home in 1958. He was from Bagasara, a city 100 km away from Rajkot in the Indian state of Gujarat.

“The family had a debt of Rs5,000. My grandfather had a goldsmith business but had incurred the debt. So, he wanted to send his son out to work and earn money. At the time, our family reputation was widely known. Since we were into business, we did not work for anyone else. My father wasn’t allowed to even go to Bombay (now Mumbai) and work for a living as the news would reach my hometown regarding the trouble in our ‘paradise’. So, when an opportunity came for my father to move to Dubai, he took it.”

In Dubai Vajubhai started working as a goldsmith at a salary of Rs500. Soon, other members of his family followed suit and joined him in Dubai.

“My grandfather Girdharlal Bhurabhai too arrived in Dubai two years later. Followed by four of my uncles and my grandfather. Today, we have over 100 family members living in Dubai,” said Anil.

Rs1 for a jewellery licence

Anil said he grew up hearing stories about the UAE life from his father. “When my father arrived at the Sharjah port in 1958, he paid Rs1 for his visa. Later, after he decided to start a business, he paid only Rs1 for a jewellery license.”

Anil has a vivid memory of the goldsmiths of those years: “The men wore white clothes which were black at their knees from the charcoal. Their nose too would be smeared with black from the charcoal furnaces they use. So it was very easy to identify goldsmiths in those days,” he said.

How did Vajubhai manufactured jewellery without sophisticated machines, in those days? Anil explains: “To melt gold you need a temperature of 1100 degrees. Charcoal was used for the same as there was no electricity in those days. My father was a tough man. That is how he survived doing what he did in the heat and with no air-conditioner. It was a hard life, one that he was willing to rough it out. Imagine if you have to heat without electricity. It was with charcoal and no AC.”

Anil was born in Dubai in 1964 and left the UAE in 1968 with his parents when he was four. He returned in 1980 when he was sixteen to join his uncle, Vinodrai Dhanak’s jewellery retail business – Golden Crown Jewellers.

“Everything I know about business today is because of how my uncle mentored me. From staying humble to being focused in my job, learning from him was one of the biggest turning points of my life.”

“In 1981, when I was seventeen, I started the family business with my brothers – Manish Jewellers and ten years later, in 1991, I branched out to start Kanz Jewellers. Today, we have members from three generations actively involved in the business. The rest is history, as they say.”

Working with his uncle didn’t mean that Anil had everything offered on a platter for him. His uncle made sure Anil made his way up the ladder on his own. He was made to stay in the company accommodation just like the rest of the company staff and received no special privileges owing to his family background.

“Getting to know the staff directly, understanding their needs, day-to-day functioning of business, and interacting with the customers – all were a different learning experience on the whole.”

Anil stayed in the company accommodation until he got married in 1985. “That is where I started saving. For me, every penny mattered and that is how I was able to build capital,” he said.

“I learnt Arabic here and the first word I learnt was ‘khamsa wa khamseen’ (55) which was the rate per gram of gold back in the days. Gram was a commonly used term while enquiring about gold rates. So while I didn’t know Arabic fluently, when I heard the word gram I would simply say ‘khamsa wa khamseen’ and the deal would be struck.”

“I started working with a team of just five people in 1991. In fact, the first staff I hired was a building watchman. I asked him to come in the evenings to clean my store. We set up our base in Dubai’s Gold Souk and today, in the same location, we have seven outlets and a special workshop for manufacturing jewellery. Our manufacturing unit is in Ghusais and has 80 workers. Around 20 per cent of the jewellery sold at our stores is manufactured in our own unit.”

Today, Kanz Jewels is a multi-million dollar outfit, headed by Anil Dhanak, managing director and his son Arjun who is director in the family business.

WHY BUY GOLD IN DUBAI AND HOW TO IDENTIFY IT

“The price of gold is cheaper here than anywhere else in the world,” says Arjun Dhanak. “There is an entire market dedicated for gold. You have designs from so many countries, one can be spoilt for choice. When it comes to purity of the yellow metal, there is no compromise in Dubai or for that matter, in the UAE. Strict inspections ensure that the quality of gold sold here is the best,” said Arjun.
All gold jewellery sold in Dubai carry fineness marks, said Anil. “They are usually engraved in some part of the jewellery and can be very tiny,” he explains. “If you cannot see the number on a particular piece, ask for a magnifying glass so that you can identify the number on the piece. It’s a quality marker. If it’s on the piece you are buying, you can be sure it’s a genuine article.”

“We are debt-free completely and that is the sole reason we are able to handle any loss we have incurred post-pandemic. Our lease has been paid upfront years in advance. So, our cash outflow is low in comparison. This has greatly helped us tide the downturn that has happened due to the Covid-19 outbreak,” Anil said.

“We renewed rent for most of our retail outlets in 2018. I have paid 10 years rent in advance. Our staff accommodation also has been on a 13-year rental contract. I paid this 10 years ago. It was just a business decision. The rents were going up and to fix my rate I paid up front. On hind-sight, this has worked really for me today,” he said.

“Our survival mantra is that we have challenged the rules set out by business gurus and worked on our own model. We do not aggressively market ourselves, we are cautious in our progress. Our key to success is location. All our outlets are in Dubai Gold Souq and that has been a winner for us.”

A Sparkling Future: How Piaget Is Supporting The Next Generation Of Jewellery Designers