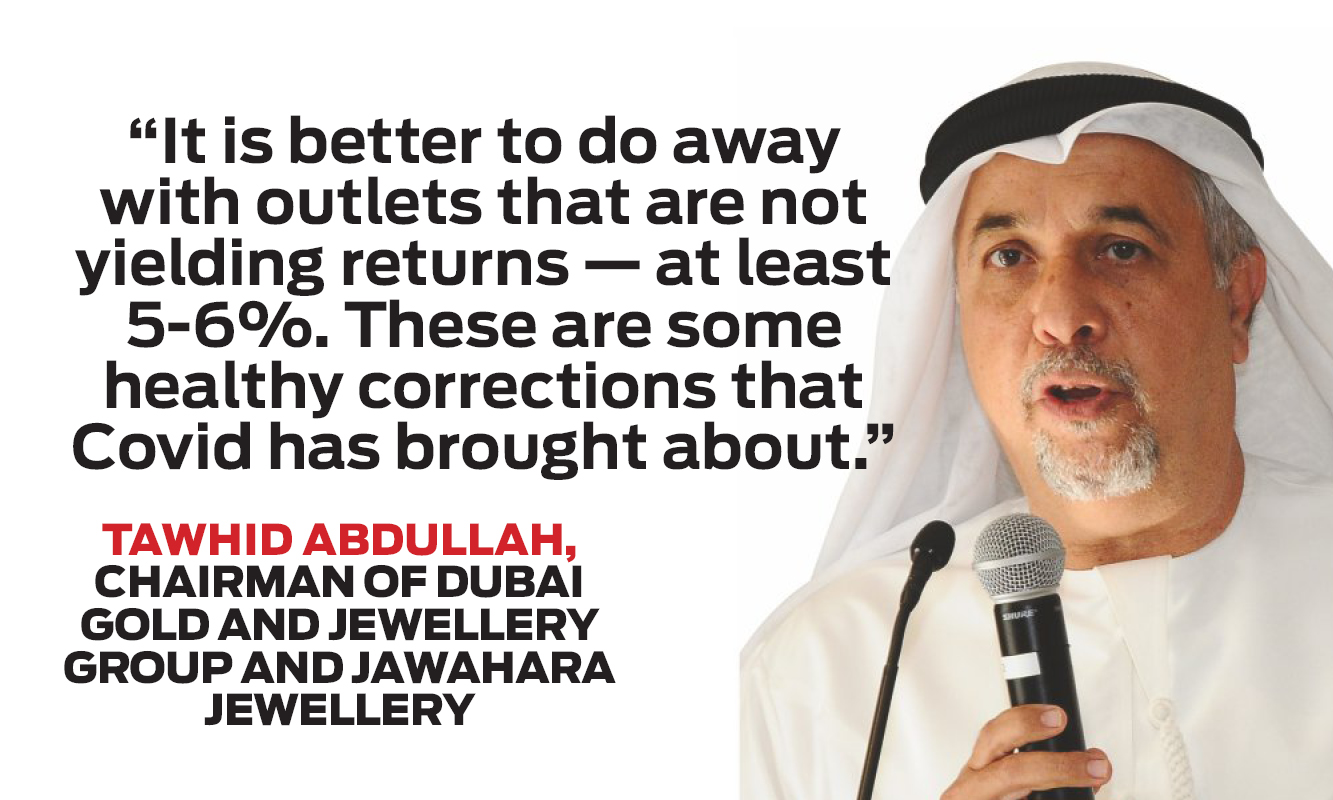 With job cuts and pruned salaries slowly getting back to their original states, the City of Gold is waiting for travel restrictions to ease as they slowly make their way back to the previous prosperity

The year that just passed us by has been a dark one. It was one where we were mostly confined to the four walls of our home. We watched helplessly as the world economy went through an upheaval. Downsizing and shutting down of business became commonplace news and people have lived in fear of job losses, under the bane of pay cuts. Most of us went back three years, and the jewellery sector was no different.

Dubai, otherwise known as the “City of Gold”, the yellow-metal haven and a tourist hotspot was no different. Like most sectors, the jewellery industry here went through a turbulence, and is now looking at some “corrections”. For one, retailers are becoming more organised and reducing the number of stores in their network. While this reduces costs, it also increases efficiency.

Tawhid Abdullah, the chairman of Dubai Gold andJewellery Group and Jawhara Jewellery, spoke about the many lessons that the pandemic has thrust on us.

“A retailer has to take stock of his books and reduce the number of stores in their network,” he said.

Some leading retailers have already started cutting the fat and downing the curtains on their low-yielding stores. Some have cut down on their operations by 20-25%in the last 20 months.

“It is better to do away with outlets that are not yielding returns — at least 5-6%. These are some healthy corrections that Covid has brought about,” Abdullah said at a media briefing on the group’s “Non-stop Winning” campaign.

Abdullah added that the gem and jewellery sector was preparing for a comeback now that travel was resuming. He expects Dubai to open up to shoppers and tourists soon.“Our industry managed to keep the job cuts to a minimum, which is a bright spot at the end of the day. Th entire workforce, by and large, agreed to pay cuts instead, in varying degrees to keep the industry afloat.

Abdullah said that the cuts were being restored from the New Year, for the staff at gold wholesalers and jewellery retailers. “When we brought in the cuts from April, we had two key considerations. Firstly, the cash flow of these businesses needed to be stabilised after the pandemic wreaked havoc. It was quite a shock. This had to be done properly and mindfully, so that the employees were not in pain,” he said. “From the very beginning, we were constantly asking business not to fire people or send them home.”

The advice came when most jewellers in Dubai, members of the group, brought in massive pay-cuts. While people at the entry level saw 10-15% cuts, the intermediate level were given a 25% cut. The senior rung dealt with the heaviest of cuts— by 50%.

“The ones who earned more put in the heaviest sacrifices, but it had to be done for the good of the industry,” said Abdullah.“We are slowly reinstating the old salaries from this year.The ministry supported us to the fullest and had helped us keep job cuts to a minimum.”

After the first quarter which went poorly, gold sales in UAE came back from the second half of the third quarter. Sales started building efficiently from November. “The third quarter of 2020 was better than its counterpart in 2019,” he added.

What about the fact that Saudi Arabia has raised VAT to 15%? For Abdullah, this is a window of opportunity. “Now, this is an additional window for people from Saudi to utilise the lower VAT in Dubai. Despite Saudi having plenty of domestic gold and jewellery manufacturers and exemptions, we will get additional business from there. But this too, will take time as we are only seeing a small chunk of visitors from that region because of the travel restrictions,” he said.

Dubai did see some tourists coming in in the last two weeks of 2020. Most of them were Indians and others came in from states that do not need mandatory quarantines.

“There are ongoing promotions, but we need people to shop in order for them to work,” he said.

Abdullah’s group’s “Non-stop winning” jewellery campaign, held in association with Dubai Festivals and Retail Establishment, was a success and it helped draw in crowds for the Dubai Shopping Festival this year.